The places we will visit on both tours: 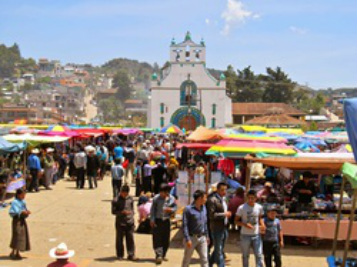 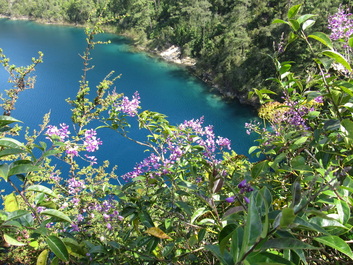 Lagunas de Montebello
Several dozen beautiful lakes dot the rain forest in southern Chiapas in a National Park called Lagunas de Montebello. Each lake has its own unique color, caused by minerals in the springs that feed them. Some lakes have boats and kayaks for rent. 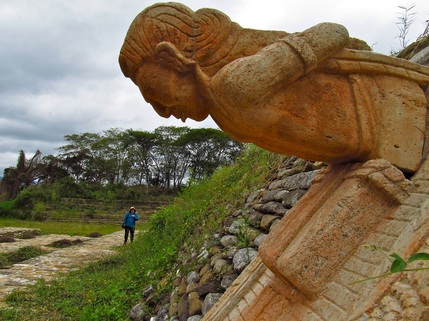 One of six "goal posts" in the ball court
Toniná is the Mayan city-state that took down powerful Palenque in 850 AD. It has a well-preserved ball court where the players were beheaded after the game on a small pyramid still standing nearby. The story behind the ballgame is a fascinating blend of myth, politics, religion, and connection with the natural world. Visitors are allowed to climb to the highest point in the pyramid complex for wide vistas of the Ocosingo Valley. The on-site museum has many fine pieces of Mayan art, including a sculpture of the God of Chocolate.
Read about the ball game 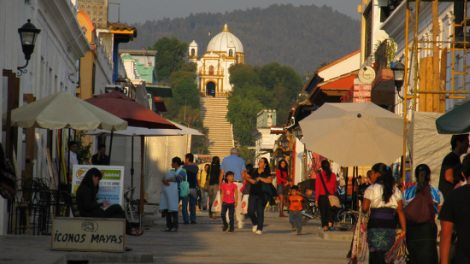 Andador de Guadalupe
Three streets in the city of San Cristóbal de las Casas have been permanently blocked off to car traffic. They are the "andadors", walking streets. Along them can be found numerous restaurants, shops, specialty stores, and hotels with all the services a traveler needs. Women from nearby villages, in their native costumes, wander the streets selling textiles, belts, and jewelry. On nice days the cafes put out tables where you can enjoy an excellent cup of coffee grown in the nearby mountains and roasted right in town.
More photos of San Cristóbal 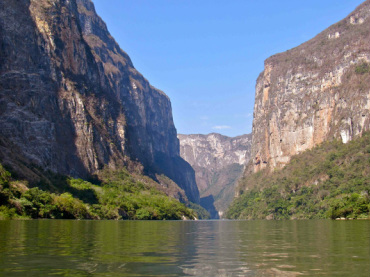 Deepest part of the Sumidero Canyon
These cliffs are featured in the emblem of the state of Chiapas. The canyon walls rise as much as 1000 meters (3000+ feet) from the surface of the water. Along the shallower edges, crocodiles can be seen basking in the sun, monkeys live in the trees, and many species of birds can be observed fishing, flying and sunning themselves on the river banks. The Grijalva river originates in the highlands of Guatemala and flows through Chiapas to the Gulf of Mexico. Along its course four major dams supply most of the electricity in southern Mexico. The boat tour of the canyon turns around at the Chicoasen dam and returns to Chiapa de Corzo. We visit this canyon on the 2-week tour.
Read about the wildlife on the river
2-Week Trip

Chiapas receives more than a hundred inches of rain a year, and in some places twice that. Water is everywhere, from rivers and lakes, to waterfalls and cenotes (sinkholes filled from underground springs). The most famous waterfall is Misol Há, dropping two hundred feet off a cliff, thunderous during the rainy season. Close by, but derived from an entirely different river system, is Agua Azul, a series of cascades with turquoise water. Santa Clara has two lovely falls hidden in the temperate rainforest near Toniná, found down a long dirt road and hiking trail. 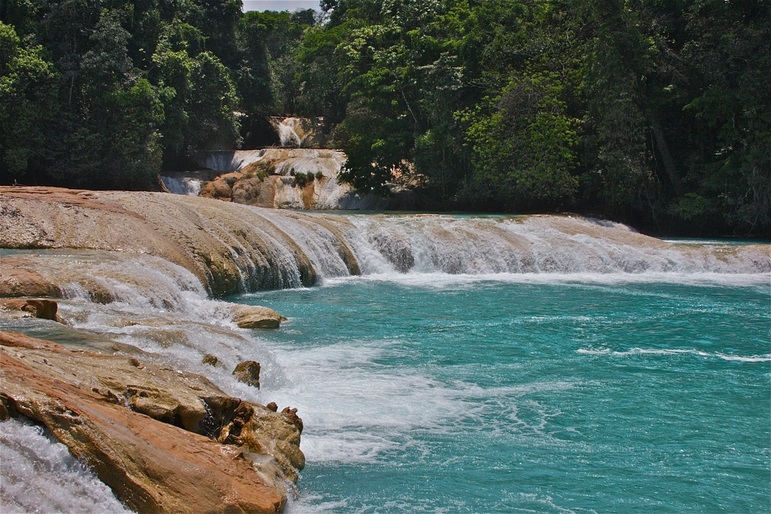 Palenque is the most famous of the Mayan ruins in Chiapas. It was the first to be excavated, and has an extensive collection of artifacts in its excellent on-site museum.  Buildings include temples, an observatory, and tombs of various leaders.