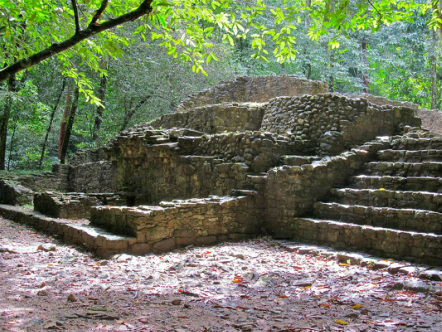 Palenque's deep jungle ruins
See the state of Chiapas on a tour like no other. Most tour companies that take you to Palenque, crisscross the same territory with many hours on the bus. This tour is a large circle through the state, 7 full days and 6 nights. The tour requires a minimum of 6 people and has a maxiumum of 10. It is available only in the dry season, January through May and can be scheduled to begin any time.

During the 7 action-packed days of the Circle Tour, we will explore five pre-Columbian Mayan city ruins: Toniná, Palenque, Yaxchilan, Bonampak and Chinkultic. On the way we will visit the the cascades of Agua Azul and the thundering waterfalls of Misol Há.

Toniná is the Mayan city-state that took down mighty Palenque. It is also the highest pyramid in Mexico, and was, for a time, ruled by a woman named Smoking Mirror. We will climb to the top of the highest temple for incredible views of the Ocosingo Valley.

Bonampak is known for its three temples that survived 900 years in a wet jungle with their beautiful murals intact. Yaxchilan was a powerful city that controlled trade on the Usumacinta River. To get there, we will ride for 2 hours in motorized boats. Afterwards we'll drive to the eco-center, Las Guacamayas, for two nights in thatched cabañas along the Lacantún River. The next day we'll take a boat tour to see endangered birds still living in their natural habitats and go on an escorted hike in the jungle where we'll see howler monkeys, colorful birds including the endangered Scarlet Macaw, and if we're lucky, a jaguar!

Continuing on west towards Comitán, we'll stop at the Lagunas de Montebello, a national park with dozens of lakes fed by underground springs that color each lake a unique shade of blue, green, red, or brown. Inside the park are the ruins of Chinkultic, the only Mayan city with a cenote. The last night of the tour will be spent in the lovely Pueblo Magico city of Comitán. Before returning to San Cristóbal de las Casas, we'll explore Tenam Puente and/or El Chiflon depending on time and interest.
Detailed Circle Tour Information

What to expect on the tour... 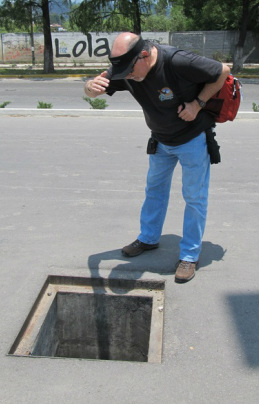 Dangerous Mexico!
During this active week, we will climb pyramids, walk up and down many hills on rough trails, and spend a lot of time exploring on foot. Before signing up, it would be a good idea to determine your personal fitness level. If you can climb six flights of stairs with brief rest stops, and walk four or five miles, then you are fit enough to get the most out of this trip. You can always opt out of an activity if you like.

We will stay in modern hotels and tourist accommodations in the jungle. Hotel rooms have private baths, double beds, and a TV. WiFi or Internet connection is usually available. In Palenque the hotel has air conditioning but the cabañas in the jungle, where we'll spend two nights, are more primitive. Those rooms have electric fans and private bathrooms with hot water. There is no cel phone service, WiFi, or Internet.

Every effort will be made to ensure your health and safety, however, nothing is guaranteed. Accidents and illnesses can occur any time. You'll be sent paperwork to sign, acknowledging that you know adventurous trips have inherent dangers. San Cristóbal is a unique and diverse city with a low crime rate. Yet still, there are dangers: uneven sidewalks, big holes, tripping hazards, close calls with cars and buses, and a few pickpockets and con artists.

As a global traveler and guide, I love it when people get excited about what they see. If I can't answer your questions, we'll find out the answers together. Come prepared with an open heart and curious mind.

I hope to meet you in Mexico! - Sherry Hardage
Detailed Circle Tour Information
“The traveler sees what is there. The tourist sees what he has come to see.”
― G.K. Chesterton